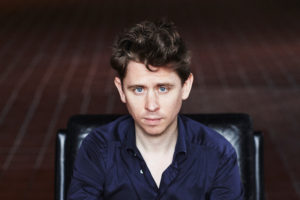 Michael Fehr (born 1982) studied at the Swiss Literature Institute in Biel and the Y Institute of the Bern University of the Arts. He lives in Bern and works as an author. His publications to date comprise «Kurz vor der Erlösung» (2013), «Simeliberg» (2015) and «Glanz und Schatten» (2017).

He was a co-founder of «Babelsprech zur internationalen Förderung junger Poesie», a project promoting young poets, for which he was one of the project managers up to 2015. Since 2013 he has been a member of the jury for the literary competition «Treibhaus».

I spent one month as a writer and performer in India and Sri Lanka. My perceptions are an important source for my thoughts and for the flights of fancy which, born from these thoughts, then take on a life of their own. This sphere of the imagination is sacred for me, as it takes me beyond what I have learnt, understood and mastered from experience, making me unshackled and therefore alive. A key element is the ability to marvel, because this sense of wonder comes before any assessment or judgment of a situation and the corresponding reaction. A situation then appears only in the openness of its potential and not yet with a closed definitiveness.

That is why I consider travelling an essential part of being a writer. By seeking out the unusual, you come to marvel, and this creates an open-ended experience that can evolve into a flight of fancy, which may be shaped into a story, which then can be told and turned into a book so that others can share it too. Neither story nor book are self-sufficient. They are created as an offer to others to convey something they just happen to be looking for or something that comes through to them just at the right moment.

With the support of Pro Helvetia New Delhi, Michael Fehr had the opportunity of spending four weeks at Sangam House in Bangalore in January 2017. The residency included an appearance at the Galle Literary Festival 2017 in Sri Lanka.

We come from various disciplines including art, activism, comic books, fiction and more. “Lumbung” is an Indonesian term for a community rice barn, used here as a metaphor for collectively pooled resources that are then distributed among stakeholders as needed.

Newsletter – Culture is Moving (24 May)