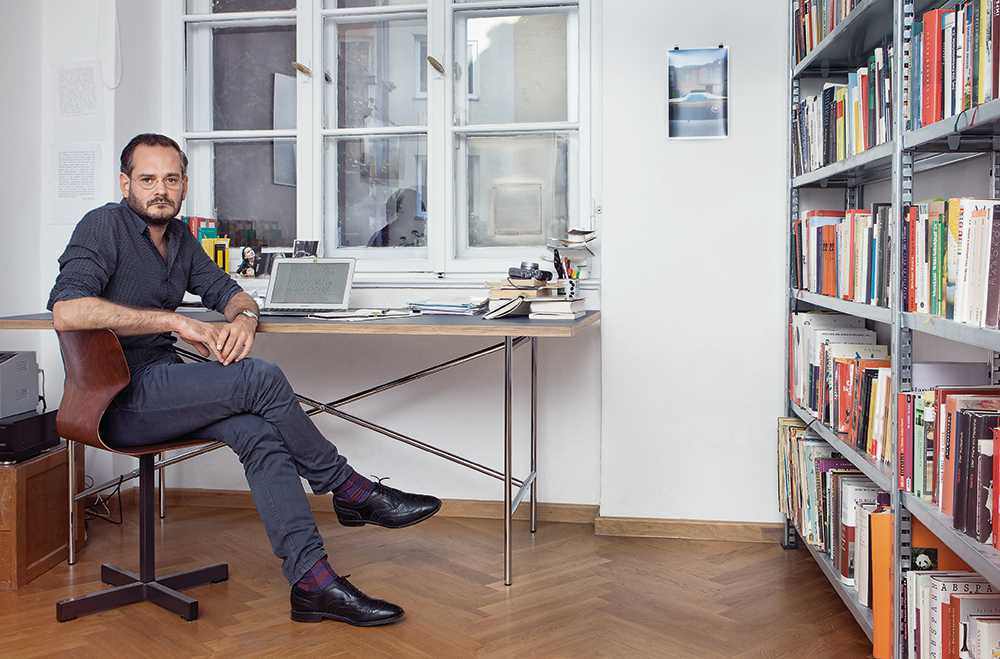 JONAS LÜSCHER was born in Switzerland in 1976, and now lives in Munich. His bestselling novella, Frühling der Barbaren (2013, published with Haus Publishing in 2014 as Barbarian Spring) was longlisted for the German Book Prize and nominated for the Swiss Book Prize. It has been translated into 15 languages and adapted for the stage. Kraft has been ranked ﬁrst in the February 2017 “SWR Bestenliste”, a list of the best ﬁction chosen by 26 prominent German critics.
PHOTO © Michael Herdlein

German scholar Richard Kraft hopes to answer a literal ‘million dollar’ question on a 21st century version of Leibniz’s Theodicy – why a good God permits the manifestation of evil. Taking time away from home to mull over his answer and to get away from family and marital responsibilities, Kraft ponders his life, and hopes that by writing the winning response – and getting the huge cash prize – he can escape to a better life.

In his second novel, Jonas Lüscher unpicks our perceptions of worth and the human condition through one man’s struggle with life. Richard Kraft is a distinctly cerebral creature – cold, logical, preoccupied. He was once a promising and ambitious scholar of rhetoric, who is now gradually realising that success – financial, professional and personal – is slowly slipping away from him. In this unhappy state, Kraft receives an invitation from an old college friend to respond to an intellectual challenge: a contest at Stanford University with a prize of a million dollars, offered by a ruthless Silicon Valley internet mogul. So Kraft leaves his wife and twin girls for California, hoping to find a way back to professional success and his former intellectual brilliance – and to free himself from his family obligations by winning the money. We follow him on his quest to write an eighteen-minute presentation that will update Leibniz’s Theodicy to explain “why whatever is, is right and why we still can improve it”. The reader walks, wanders, crawls, and even nearly drowns with Kraft as he considers his own crumbling existence. With precision, wit and bite, Jonas Lüscher tells the story of a highly intelligent, but self-delusional man and of a powerful elite that is prepared to break every taboo.

The key to the translation of this book is recreating Kraft’s thought processes – his knotted ruminations on the neo-liberal age, his nostalgic dips into the past, his overly active and wandering mind – in a lucid and engaging way. The translator would need to inhabit Kraft in order to fully grasp all his theoretical references and his contradictory personality. This is a masterful, well-crafted and ambitious book that shines its spotlight on the age we’re living in, and lets us experience a character’s inner world in a way that’s rare to find.

“This act of self-empowerment awakens a feeling of boldness in him, and he takes measured steps across the deserted campus. Why not? To be shot by someone running amok around a top university in America didn’t seem like the worst possible endpoint to his biography, and, as he thinks about how tricky it would be for his colleagues at the conference on optimism to have to support and explain the notion that everything that exists is good having had one of their number murdered in cold blood a few days previously, he becomes quite excited…”

Jen Calleja is a writer and literary translator from German. She has most recently translated books by Gregor Hens, Kerstin Hensel and Wim Wenders, and will next translate Swiss author Michelle Steinbeck’s debut novel Mein Vater war ein Mann an Land und im Wasser ein Walfisch. She is former acting editor of New Books in German and is the inaugural Translator in Residence at the British Library.