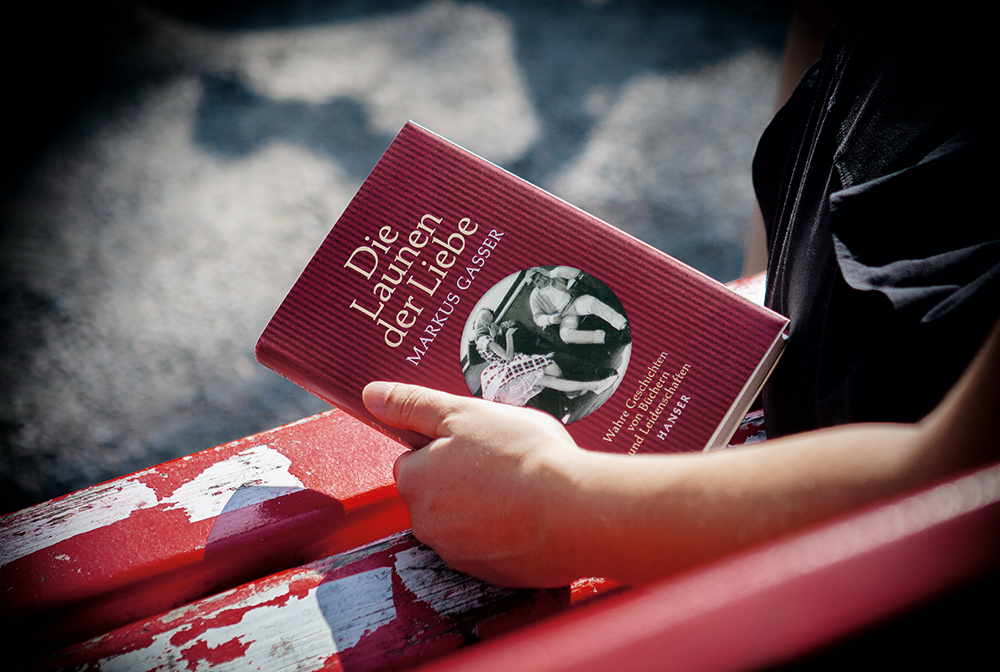 THE MOODS OF LOVE
MARKUS GASSER MARKUS GASSER was born in 1967 and studied German and English in Innsbruck. He lives in Zürich and works as a writer and critic. Hanser has published the following: Das Buch der Bücher für die Insel (The Book of Books for a Deserted Island) and Eine Weltgeschichte in 33 Romanen (A History of the World in 33 Novels). Markus Gasser hosts a regular YouTube series in which he discusses new literary publications:
youtube.com/c/literaturistalles
Photo: Peter-Andreas Hassiepen

How much real life can be found in a book? The literary scholar, essayist and critic Markus Gasser explores the various bonds of love depicted in the works and life experiences of a range of writers, from Johann Wolfgang von Goethe to Gabriel García Márquez, from Emily Brontë to Sylvia Plath. He shows how they transform their own experiences into literature; how their longing and desire, unions and marital bliss, unrequited love, crisis, betrayal and separation become part of their works, and how literature itself enters and transforms their lives.

The debate about how much of themselves artists include in their own work is as old as art itself. Purists treat an author’s work as completely separate from their life, while at the other extreme, critics often view an artist’s work solely as a reflection of their life, with many nuanced and differentiated positions in between.

For this volume, Markus Gasser has selected 15 love stories involving authors who explicitly endorsed the autobiographical aspect of their work. The book covers passionate relationships such as that between the writers Sylvia Plath and Ted Hughes; then, there’s Gabriel García Márquez’s story of two lovers in one of his novels. In another chapter we read of Bettine von Arnim’s adoration of Johann Wolfgang von Goethe; in further chapters of the lives and loves of John Updike, Marguerite Duras, George Eliot, Vladimir Nabokov and John Galsworthy. Markus Gasser analyses the great names of world literature at the very moment when their love lives and literary output intersect. All these authors turned their love stories into literature; at other times, it was the other way around, as their literature miraculously worked its way back into their love lives.

Gasser is interested not only in how real life inspires the great works of world literature, but also in the whole process of transforming life into literature; how an author draws on personal experience in order to create a unique literary world. Thanks to Markus Gasser, we are granted this unique opportunity to see how they do this, to look over their shoulders as they create their art. That is the really original aspect of Gasser’s book. It provides a fascinating and sensuous account of the exhilaration of literary and romantic fulfilment, at the same time showing us how literature can help transcend disappointment, loss and death itself.

Click here for a SAMPLE TRANSLATION by Alyson Coombes

“He was there for her and her alone; he fixed his eyes on hers with hypnotic insistence and she felt the very foundations of the universe shaking.”