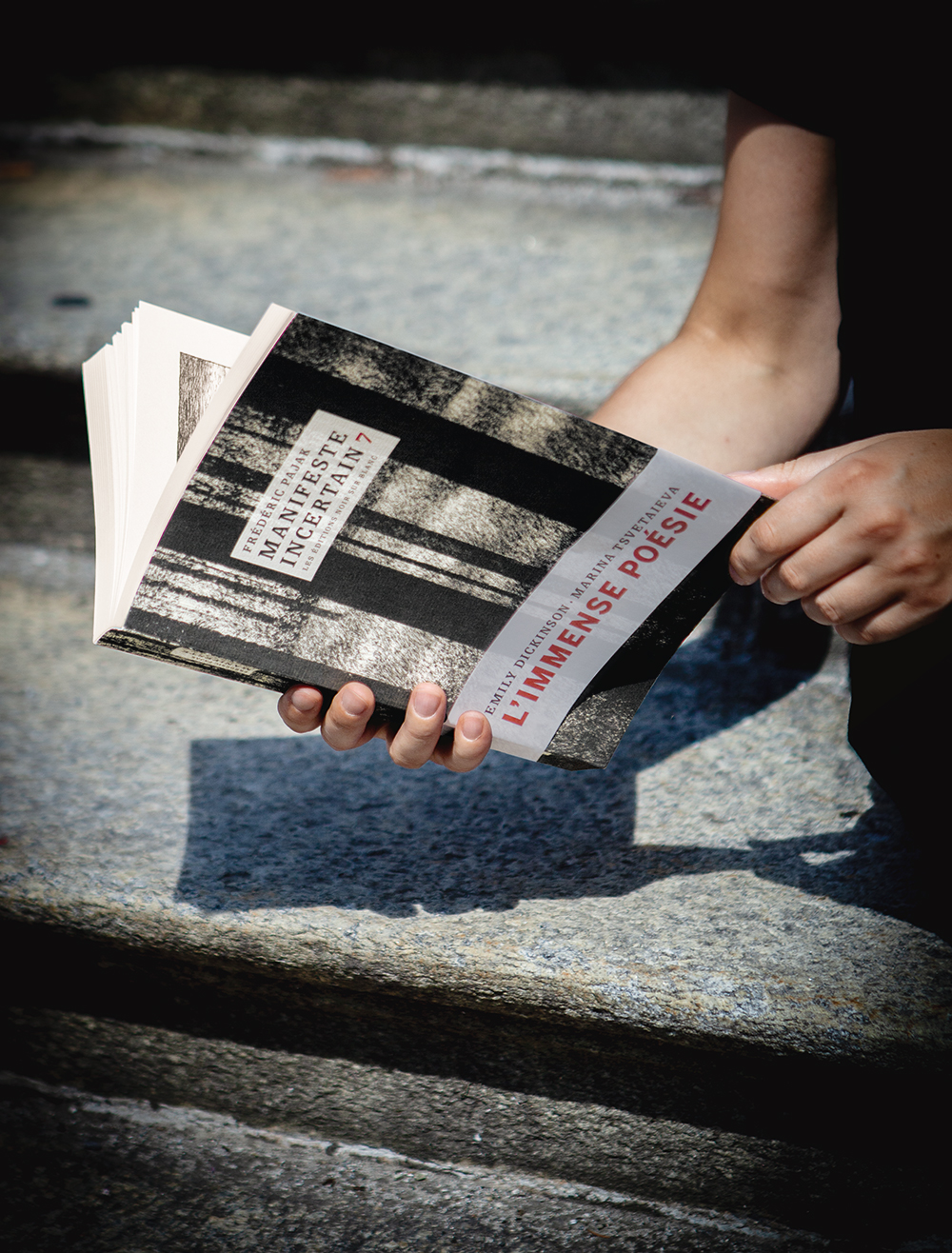 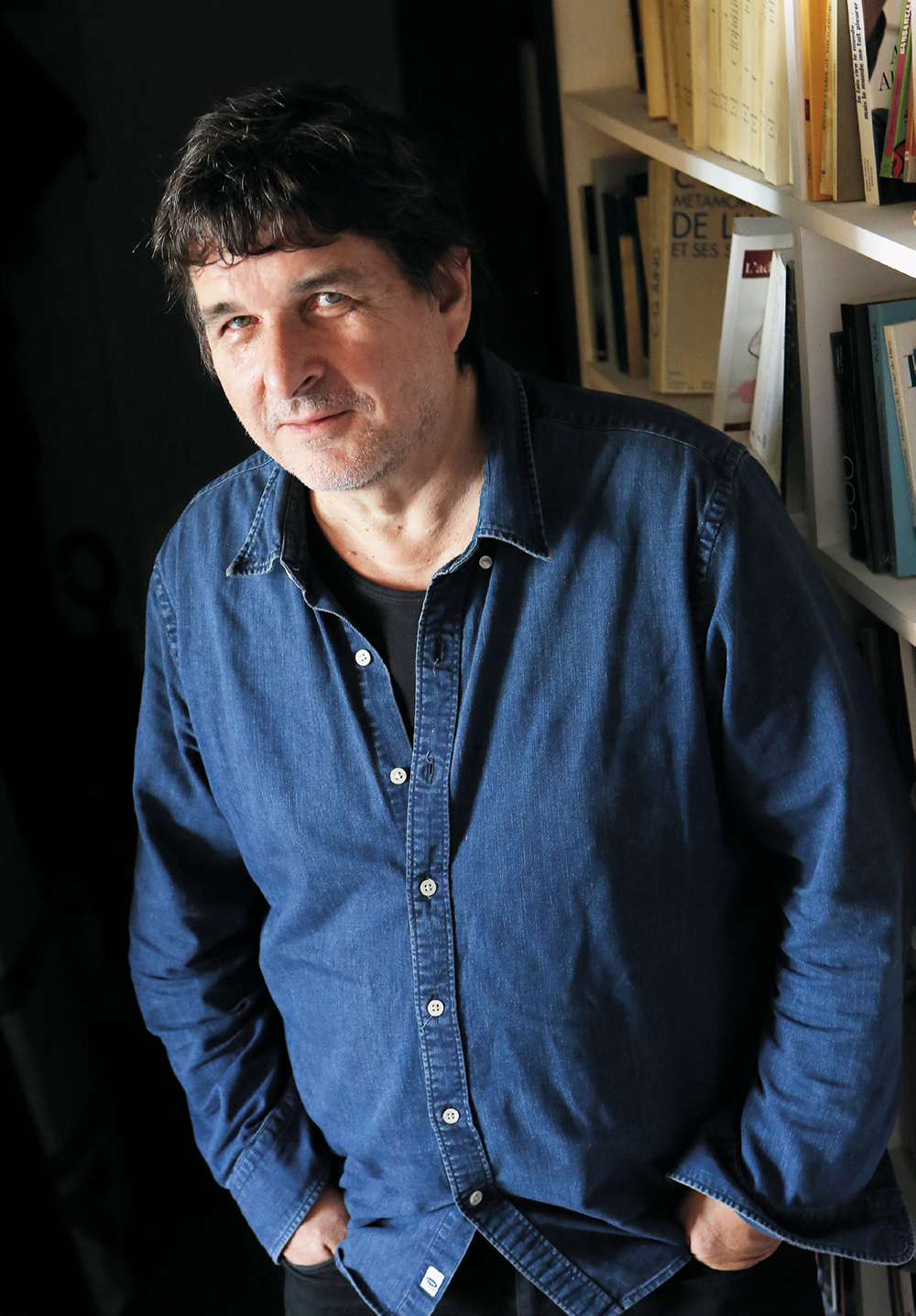 FRÉDÉRIC PAJAK is a Swiss French writer, graphic artist and editor. His works combine both prose and drawings to create his own unique prize-winning genre. Following L’Étrange Beauté du monde (The World’s Strange Beauty) and En souvenir du monde (In Memory of the World), the new edition of L’Immense Solitude (Immense Solitude) and the first seven volumes of Manifeste incertain  (the first one translated into English as Uncertain Manifesto), Éditions Noir sur Blanc continues its publication of the works of Frédéric Pajak. He won the Médicis Essay Prize 2014 for Manifeste incertain 3, as well as a Swiss Literature Award in 2015; in 2019 he won the Prix Goncourt for Biography for Manifeste incertain 7.
Photo: Louise Oligny

What do Emily Dickinson and Marina Tsvetaeva have in common? Not a century; not a country, but the sheer inability to take the easy path in their art. They are both also tireless in their efforts to “reinvent it, each one in her own fashion”. In this volume of Uncertain Manifesto, Frédéric Pajak tries out different forms, part novel, part poetry, to give us two stories of two exceptional lives on the fringes of society. He writes that he can only hope to scratch the surface: Marina Tsvetaeva, he says, “can only elude me”, and Emily Dickinson “can only elude me more”.

So far, Pajak has profiled, amongst others, Walter Benjamin, Ezra Pound, André Breton and Vincent Van Gogh. In his seventh volume of Uncertain Manifesto, he has, for the first time, turned the spotlight on two women who created – to use his own words – “female poetry”.

From the first lines of their respective biographies, it would seem that these two women have nothing in common. Dickinson grew up in a peaceful, prosperous household and was so solitary that she was almost not of this world: “My friends are very few. I can count them on my fingers – and besides, have fingers to spare.” As for Tsvetaeva, she experienced growing and often miserable poverty. She collected companions and amorous encounters, and was a keen observer of the political upheavals in Europe during her lifetime. She was bold in her views and never hesitated to take risks. So in spite of the deep differences in the lives of the two women, they shared a common core: similar souls. More important than the body, more essential than the outside world, for them and for Pajak, the soul symbolises eternity, a recurring theme in the lives of the two poets, for whom vulnerability was their very essence. This is what enables them – through their poetry – to maintain a distance between themselves and their misery. “What am I here for?” asks Tsvetaeva. “To listen to my soul.”

As well as text, Frédéric Pajak illustrates the lives of Dickinson and Tsvetaeva with a series of black-and-white drawings. Often mimetic, sometimes metaphorical, the images intensify the poetic force of the text. Thus, when in 1922 Tsvetaeva leaves Berlin for the Czechoslovakian countryside, the drawings likewise ‘leave the city’, plunging into a forest which has at its very centre – in black and white – a cemetery.

Biographies and histories are often illustrated with photographs which create, or dictate, an oppressive reflection of the person or place. Pajak’s drawings set out to do something very different: by showing less, he shows more. His sketches prefer the reality of the soul to that of the world and thus bring the biographer and reader closer than ever to the essence of what Dickinson and Tsvetaeva themselves were trying to express.

When Pajak depicts an existence, he does not just content himself with setting things down for posterity; he views the events that have marked humanity through the prism of individual lives. He turns things on their head, ignoring the bigger picture in favour of the smallest detail. Wednesday, 18 June 1941: Marina Tsvetaeva heads off on an outing, visits a château, relaxes next to a lake. In this scene, the German invasion of Russia is only mentioned at the very end of the paragraph, almost as an inconsequential afterthought. This is what makes Uncertain Manifesto 7 special: History is retold through the experience of human stories.

Click here for a SAMPLE TRANSLATION by Romy Fursland

“In reality she is not writing for anyone, not even for herself: she is addressing Eternity, an Eternity which she calls out to, whose presence she senses, and which responds to her through the flowers, the bees or even just the falling night.”