Self Publish, Be Happy
ECAL
Website of the photographer 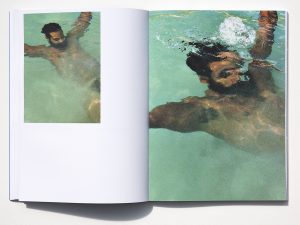 Hola Mi Amol is as much a photographic narrative as a performance. The book traces the encounters between its author, the Franco-Dominican photographer Karla Hiraldo Voleau, and seven Dominican men. The images of these men, in which the author appears episodically, have a raw and sensual, often erotic, character. At first glance, they seem to be pure snapshots, spontaneous and without artifice, yet their nature becomes increasingly ambiguous as we turn the pages. Which role do they play in the performance, in the mise en scène? Are the anecdotes about these encounters part of an intimate diary or rather of the script? By playing with these doubts, the photographer raises broader questions that reach beyond the autobiographical narrative. She appropriates the white woman’s quest for sexual or amorous adventures with exotic men, which has shaped the Western imagination as well as her family history and origins. It puts to the test her role and identity as well as potential relationships between personal emancipation and the repetition of history. Danaé Panchaud