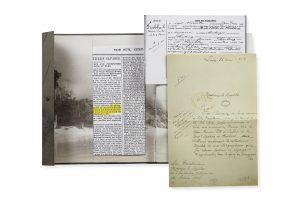 Aya takes readers to the heart of the Peruvian Amazon, and enables them to retrace the footsteps of the photographer Charles Kroehle, who disappeared in 1900. Arguiñe Escandón’s and Yann Gross’s images respond to Kroehle’s, with the two bodies of work stirring the Western fascination for this unique environment and its inhabitants. Their deeply seductive photographs, with their dark, muted tones, reflect this attraction tinged with mysticism. The traditional use of medicinal plants forms the basis of the volume until the unexpected moment when the authors emancipate themselves from a history and an imagination that both guide and limit their approach. Tropical vegetation is once again invoked for its chemical properties and its ability to make images appear. Then, however, its photosensitivity rather than its hallucinatory potential is explored. The fruits of this botanical research are compiled in the form of visual illustrations and notes, in an aesthetic inspired by 19th century science. [Danaé Panchaud]