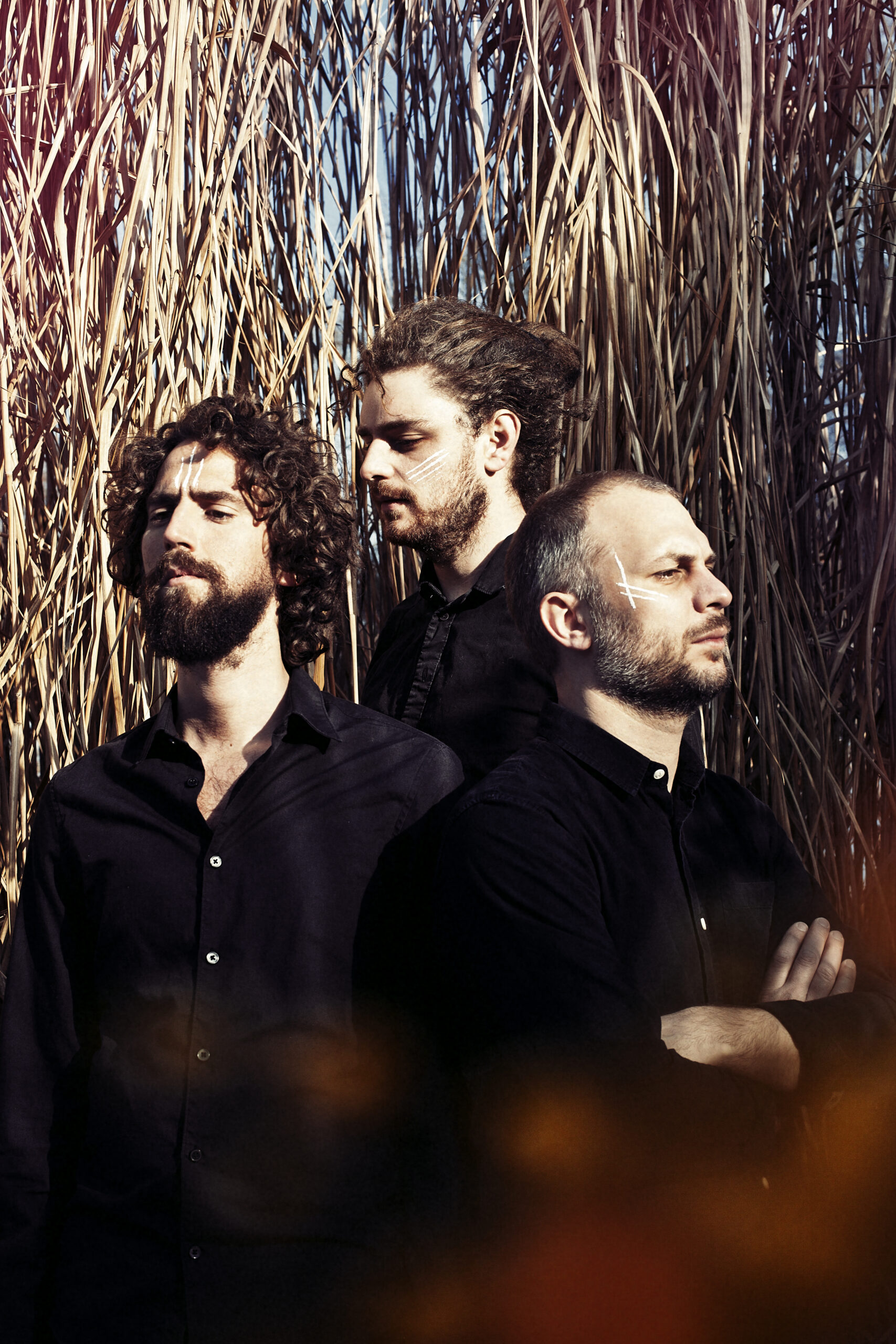 KALI represents the fresh and deep spirit of a new post-genre generation of musicians. Nicolas Stocker (drums), Urs Müller (guitar) and Raphael Loher (prepared piano) are natives of a contemporary music world in which new minimal, ambient, noise and new classical chamber music are just variations of a common language. They feel at home in a simultaneously composed and free and improvised musical context and follow their intuition with a broad and non-ideological understanding of music history.

What did jazz musicians from Switzerland do during the lockdown? And what is on the horizon for them next? The musicians of KALI Trio share how they ventured into the world of yoga and what is on their minds now. Pro Helvetia supports KALI Trio as part of the high priority jazz promotion.

«The lockdown raised several interesting questions about the value of culture in Switzerland.»

How did you experience the lockdown phase?

Raphael started fasting, and he can now get his leg right up behind his head thanks to Ashtanga yoga. Nicolas had to leave his girlfriend behind in Oslo and to take care of his broken elbow. Urs lost his soul in the intricacies of Ableton and then became the last member of our band to start practicing yoga. During the tough lockdown we had to make do with a weekly meeting via Zoom. Playing music together was only possible again from early May onwards. We are currently fine-tuning the pieces for our second album, which we are planning to record in August. So there’s light at the end of the tunnel. We did, however, also enjoy the possibility of spending a lot of time with just our own instruments.

What questions were foremost in your mind during the lockdown?

Currently it’s the debate all around racism after the death of George Floyd. How can we, as white jazz musicians, support the Black Lives Matter movement and give something back to the Afro-American culture, to which we owe so much and that influenced us so deeply as musicians.

The lockdown also raised several interesting questions about the value of culture in Switzerland. As self-employed musicians, we were all affected by the banning of cultural events. Thanks to the wonderful commitment of Sonart and Pro Helvetia, we were able to cover a part of our lost revenues. But the experience has also shown that professional musicians and performers like us have to join forces much more in order to be recognised as an important part of society.

What were your experiences with the new online formats?

Since Raphael was unable to take his grand piano home, we couldn’t produce live streams from our living rooms. So we’re delighted to have the opportunity of taking part in #ZüriStreamt in Moods on 2 August, which will be our first streaming concert. Nicolas, together with a group of Zurich-based musicians, set up a curated streaming platform called kapsel.space, which since the beginning of the lockdown has broadcast hundreds of streams by Swiss and international artists. With the digital festival by the name of “die Entkapselung” from 19 to 21 June, over 40 acts were again able to explore streaming as a medium, also in collaboration with video and visual artists in the final event of kapsel.space.

How are you coping with the uncertainty resulting from the ongoing restrictions in the music world?

At the beginning of the lockdown, we assumed that we wouldn’t be playing any more concerts in 2020. In the meantime, we have learnt that quite a few event organisers are keen to book Swiss acts. This has given rise to the hope that the relevant clubs will be open again from autumn on and that the music scene and the cultural scene in general have a future to look forward to.

What remains? Is there anything that you wish to retain from the lockdown experience?

Pro Helvetia has awarded a creation grant to nine authors.

Newsletter – Culture is Moving (24 May)