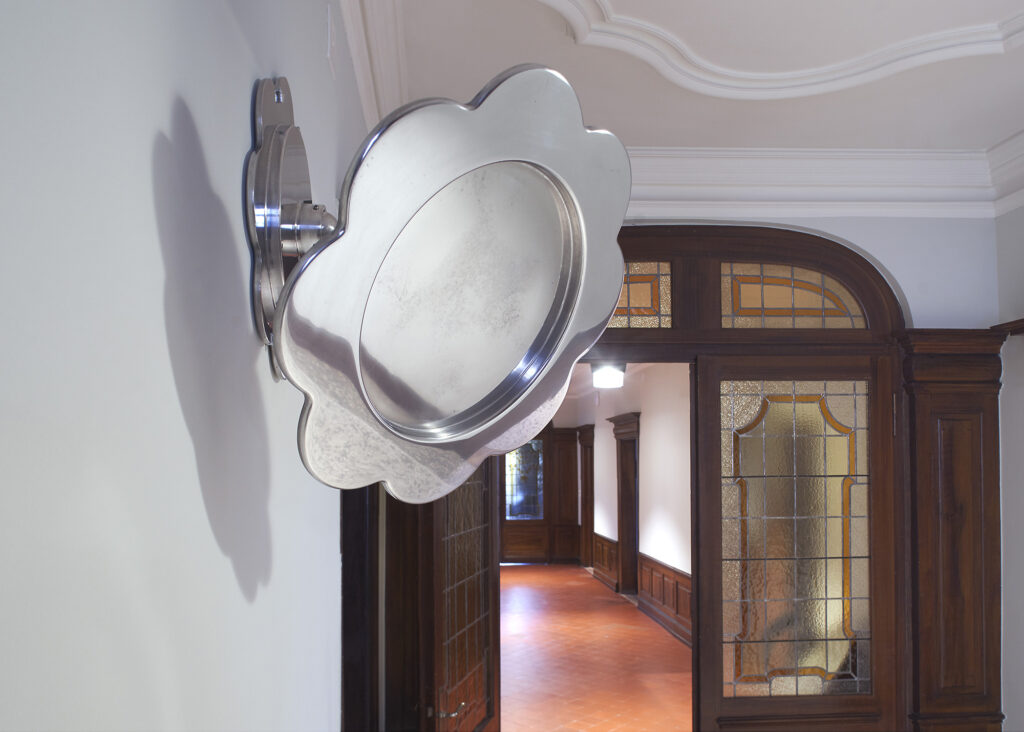 What kinds of forms do people give to the objects that surround themselves with in everyday life? Functionality may be a Western capitalist credo of product design, but if we expand the temporal, geographical and cultural horizon, this maxim soon becomes obsolete. Then notions such as representation, tradition and imitation come into play. In a series of works, Dorota Gawęda and Eglė Kulbokaitė draw on the world of things they associate with their childhood in Poland and Lithuania. The starting point for Yield is a design for cosmetic mirrors that enjoyed great popularity in the countries of the former Eastern Bloc. The mirror has the shape of a flower: stylized yellow plastic petals enclose the round mirror surface. This template from industrial mass production undergoes a kind of critical sublimation process in Gawęda and Kulbokaitė’s work. This is also how the title alludes to yields, profits and returns. It points not only to the exploitative logic of agricultural production, but also to the transformation from the Soviet to the capitalist system that has been at work since the early 1990s, and which has shaped Gawęda and Kulbokaitė’s generation like no other. Indeed, in Yield, for which the artists made aluminium casts three times the size of the original object, little remains of the dusty clichés of Soviet living. Instead, we are reminded of the sterile product aesthetics of the world of technology. The flower form, domesticated through this playful, pop reduction, presents itself anew in a materiality that we are more familiar with from technical devices. In the entrance area, the mirror directs its moving blossom at those entering – an association with a surveillance camera is unavoidable: we are seen and see our reflection. For Gawęda and Kulbokaitė, Yield stands for humans’ claim on nature as well as for mechanisms of observation and control.

Dorota Gawęda (*1986) and Eglė Kulbokaitė (*1987) are an artist duo living and working in Basel. Both graduated from the Royal College of Art in London in 2012. Their work spans performance, sculpture, photography, painting and video. They are the recipients of the Swiss Performance Art Award 2021 and have been nominated for Prix Mobilière 2022. They are the founders of the YOUNG GIRL READING GROUP (2013–2021).