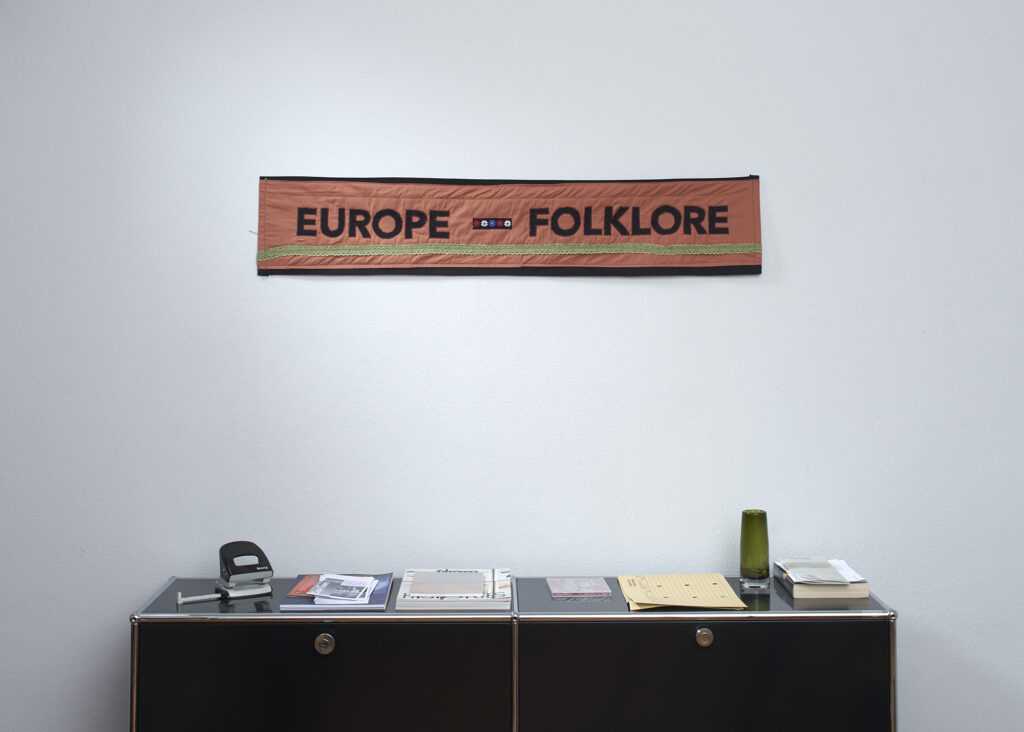 The words LIEBE, BAUCHWEH, GEFÜHLE (love, stomach pains, feelings) float in the form of a long, colourful banner above an office desk, over the door frame in one of the corridors, and on the wall next to the printer. The letters were carefully cut by hand from selected textiles from Milan, and stitched onto a fabric background in tight zigzags. Andreas Hochuli has made a total of twenty different fabric banners for Pro Helvetia’s offices, all of which feature meaningful words or phrases, in French, German, English, or Italian, such as RÉFORMES (reforms), RÉTROPLANNING (retroplanning), or EUROPE FOLKLORE. The semantic weight of the words is contrasted by the lightness of the fabric and the nonchalant placement of the banners. In a small social act, the banners were distributed to interested employees, who helped to hang them. Hochuli likes the fact that words can trigger diverse chains of associations in different viewers, annoying some and making others smile; he does not take a position, but leaves his works to our interpretation. However, all of the texts are either titles of his paintings or past exhibitions, so they remain perpetually linked to his oeuvre. If, at any point, the words become too intrusive in the daily work routine, if INTIMATE ENERGIES or VOTRE AVIS (VIOLENCE) (your opinion violence), for instance, should start to strain the nerves, they may be exchanged with other banners.

Andreas Hochuli is first and foremost a painter. In his paintings as well, he knows how to communicate through a combination of colours, forms – sometimes reminiscent of advertising images or paintings of classical modernism – and text, tranches du monde (slices of the world), as he calls it. On a square of canvas and paint, he condenses snapshots of his own observations or small truths. In doing so, his focus is not on the harmony of the different elements – he likes irritating colour combinations, for example. Rather, he seeks to open up an associative space that can be interpreted in a variety of ways.

Andreas Hochuli (*1982) currently lives and works in Geneva, and was previously based in Lausanne, Leipzig, and Berlin. Besides his practice in painting, he is part of the artist-run band L’Acte pur, together with Tristan Lavoyer, and which won the Swiss Art Award in 2021. Hochuli studied fine arts, art history, philosophy, and literature in Lausanne.