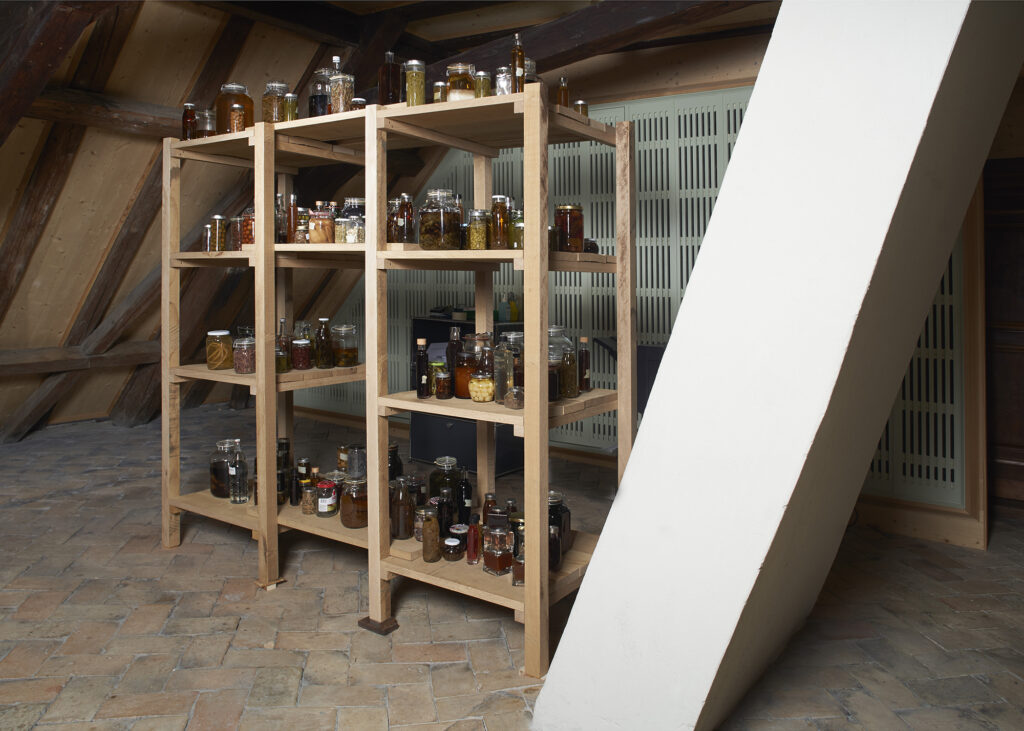 Sandra Knecht presents here a selection from her ongoing series, Home is a Foreign Place. Started in 2016, it currently comprises a collection of over 300 Heimatgläser (homeland jars). The project began when Koyo Kouoh and Samuel Leuenberger invited Knecht to Salon Suisse, part of Switzerland’s presence at the Venice Biennale. Knecht was asked to create food dishes interpreting a range of tastes, from the Swiss mountains to the sea in Venice. She began to preserve, pickle, and boil plants she found, creating a kind of cartography of the natural world around her. At the same time, she preserved her homeland in all its diversity.

The project illuminates themes central to Knecht’s work, such as transformation, identity, and diversity. For the artist, the notion of “home” is something dynamic and based on encounters with nature. Identity is formed through this encounter, in exchange with animals, plants, and people. In Knecht’s work, the transformation of plants and animals, which can be seen in the Heimatgläser and in the preparation of food, is a symbol for, and a means of, changing social coexistence and rigid constructions of identity. This exploration is evident not only in her cooking, but also in the artist’s visual and conceptual works, such as the social sculpture Babel, realized in 2021 in the park of Hofgut Mapprach. For this, Knecht tested the “socialization of chickens” in an aviary and created a temporary home for guinea fowl, pigeons, various chicken breeds, and plants. The project, and the book of the same name, focused on the question: How much diversity can a society tolerate? According to the artist, this question will be with her for years to come.

Sandra Knecht (*1968) lives in Buus, a small village in the Swiss canton of Basel Land, together with her many animals. From 2016 to 2019, she hosted a dinner series at her restaurant Chnächt in Basel, called Immer wieder sonntags (Again Every Sunday).  After working as a social educator for many years, she completed an MFA at the University of the Arts in Zurich.