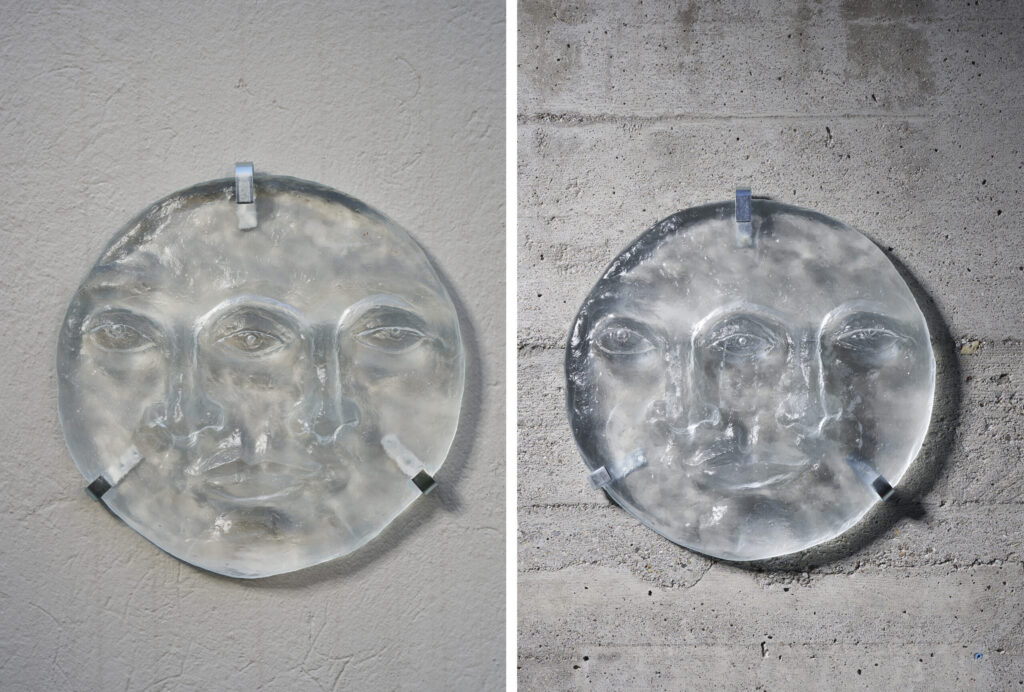 A face with one mouth, two noses, and three eyes – Marie Matusz has for a while been working with this curious figure, whose origins lie in an Italian backyard. There, Matusz found the broken piece of a stone relief, with this ambiguous figure all that remained. Is it the moon and/or sun? Two faces overlap; the left and right eyes are directed upwards, while the middle one looks straight ahead in search of eye contact. Matusz draws an arc from depictions on ancient reliefs to traditional Asian philosophies. In Chinese Taoism, the right eye stands for the sun, for activity, and the future; the left eye stands for the moon, for passivity, and the past; and the third eye symbolizes both overcoming of this duality and intuitive perception. The three-eyed representations of the Hindu deity Shiva is another well-known association that comes to mind.

Matusz underscores the ambiguity of the figure not only by creating two identical replicas, but also by having them cast in glass. Back to back, the transparent faces both welcome the employees and see them off. Sometimes there is hardly more than a shadow to be seen, while in another moment, the sun reflects in the glass. With the figures mounted at eye level, Matusz aims to spark a moment of reflection in this place situated between the public and the institution – an encounter with the self. The artist is interested in the connections that an artwork can establish with the person looking at it – not as an object that conveys knowledge, not as a symbol of power, but as a counterpart that bears an individual truth for the viewer. The third eye that looks back at us stands for this personal level of art perception. The work Soon – a play on the words for sun and moon – is part of Matusz’s research into concepts of “framing”. In the social sciences, for example, the term refers to how we communicate with different actors through certain social constructs or contexts, or how we mentally process facts with reference to our existing knowledge. Successful framing contextualizes topics that are otherwise difficult to grasp, so that people can connect to what they already know. For Matusz, therein lies the potential of her artistic work as a framing technique.

Marie Matusz (*1994) lives and works in Basel. She completed a BA in Visual Arts at HEAD Geneva in 2016 and an MA at the Academy of Art & Design (FHNW) in Basel in 2018. In her work, Matusz often starts with a critical engagement with forms and their inherent meanings, drawing on a variety of philosophical, sociological, and linguistic theories as part of the process. Her research manifests in minimalistic sculptural installations, sound works, texts, and films.