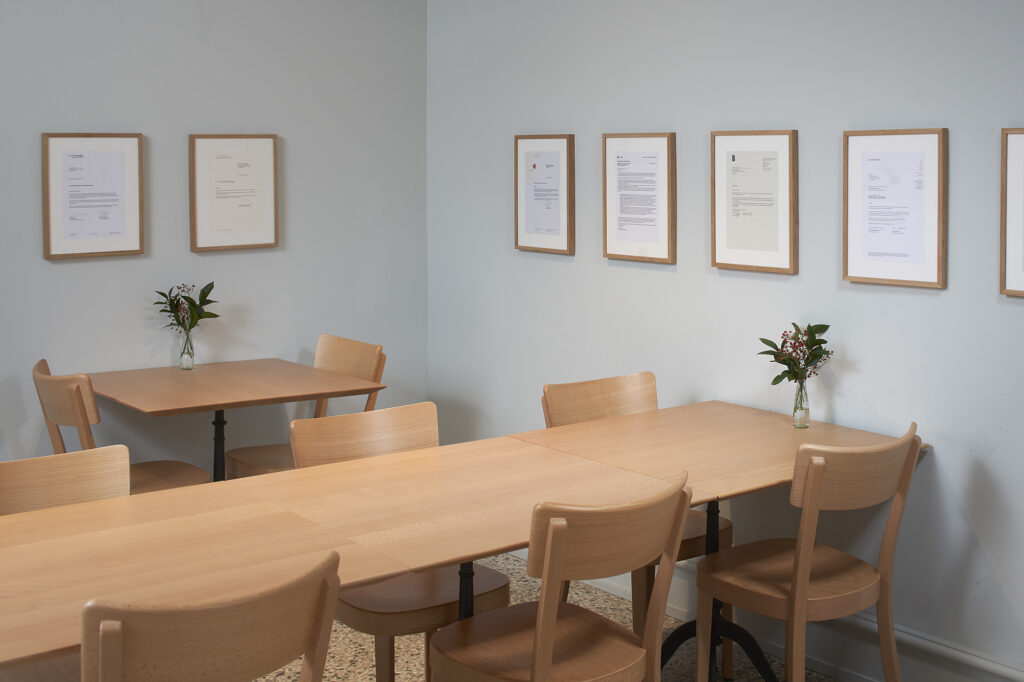 Doors are not just physical things that swing on hinges, they are mechanisms that enable an opening and a closing, 2021
10 original refusal letters printed on different white A4 paper and framed

Translations of the letters in English, German and French

Ramaya Tegegne is co-founder of Wages For Wages Against, an initiative that campaigns for better working conditions and fair pay for artists. Whereas just a few years ago it was acceptable for artists to create exhibitions or take part in events without pay, today, thanks to campaigns like this one, artist fees have now become more common (though still far from universal) practice. Tegegne illustrates the ups and downs of artistic remuneration in her Cahier d’Artistes, providing the financial history of the works depicted.

Tegegne’s work at Hirschengraben also ties in with realities otherwise unseen. Every day, staff members here and the experts they bring in evaluate artistic ideas and projects, awarding them prizes as worthy of support or rejecting them. The latter are the focus of Tegegne’s contribution. Neatly framed, she presents ten original letters of rejection that she has received recently. A film festival rejects her submission with a touch of empathy; the Rijksakademie explains its criteria in great detail, whereas a foundation sends only three terse standard sentences. A letter from Pro Helvetia can also be read. With her outspoken gesture, Tegegne puts her finger on the imbalance of power in the art system. She insists on more transparency regarding the conditions under which artists are granted admission into the art world. Not only is it who gets selected that matters, but who makes the selections. With her title borrowed from queer feminist theorist Sara Ahmed, we need to understand the mechanisms by which doors open and close. Tellingly, Tegegne places her critique from within. She emerged as the winner of the competition for the Cahiers d’Artistes, and with this work she pays tribute to those who received a “no”.

Ramaya Tegegne (*1985) lives and works in Geneva. Through her performances, installations, discussions and publications, she explores structures of dominance and power in culture. She holds an MFA from HEAD Geneva and a BA in Design from the Gerrit Rietveld Academie in Amsterdam. She has been awarded several residencies, in Paris, Rio de Janeiro, London and New York.