still in Zurich until mid-October 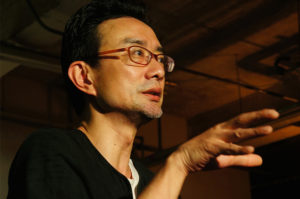 Theatre of a different kind

His performances take place on building sites, in restaurants or in auditoria. His actors are ordinary persons. And his audiences are invited to exchange opinions with the participants at the end of the play, which leads to questions, criticism or even abuse, and so becomes part of the performance. With his Grass Stage theatre, Chinese director, author and curator Zhao Chuan embarks on social explorations and mirrors sections of life in China that some might prefer not to be confronted with. In World Factory, his latest piece, he reflects the reality of factory workers producing all those gadgets we have come to rely on. A madman’s story deals with fantasies of social advancement generated by real-life capitalism, and Little Society I and II spotlights life on the margins of Chinese society.

«The people performing these pieces are like anyone you might meet in the streets. They do not belong to the specific class of ‘actors’ who depend on a theatre’s intake or are provided for by the system,» writes Zhao Chuan in a recently published essay («Grenzpolitik von Körper und Raum – Gesellschaftstheater jenseits der Gesellschaft»). «They publicly demonstrate the identities, postures and manners of speaking of completely ordinary people, revealing a critical and deeply paradoxical relationship to the utterly deformed picture of reality long propagated by the state.»

Not surprisingly, Zhao Chuan’s theatre has to seek its own stages, as access to official ones in China is barred for this kind of art. «The Grass Stage theatre deliberately tries to keep a distance to any form of institution, to continue to think and act independently, and to develop new relations between theatre and society that specifically allow for tensions to exist,» explains Zhao Chuan.

The fact that the audience is drawn into the play in the discussion following the performance is a key part of his artistic and social concept. «Sometimes we are confronted with a torrent of questions, which makes the audience discussion last almost as long as the performance itself.» And sometimes Zhao Chuan’s Grass Stage theatre has a classic cathartic effect: Turmoil breaks out, and tears are allowed to flow.