Pro Helvetia has been at the forefront of Swiss cultural policy since 1939. Established by the Federal Council on the eve of World War II, it was initially a working group “to defend Switzerland’s independent cultural identity” against Nazi Germany and fascist Italy. In 1940, it set up its first two office rooms at Hirschengraben in Zurich.

Pro Helvetia was converted into a public-law foundation in 1949. Its mandate was to preserve Swiss culture, promote it at home and disseminate it abroad. Mandate and organisational form were laid down by law for the first time in 1965.

Over the years, international activities became increasingly important. In 1985 Pro Helvetia opened its first office abroad, the Centre Culturel Suisse in Paris. This was followed by a liaison office in Cairo (1988). Pro Helvetia subsequently established a whole row of liaison offices and partnerships with other institutions around the world.

Since its foundation, Pro Helvetia’s tasks and organisational form have regularly been adjusted to shifts in social and cultural requirements. As historian Jakob Tanner wrote on the occasion of its 70th anniversary [LINK zur Publikation Pro Helvetia 1939 bis 2009], “criticism was often the engine of change, inducing Pro Helvetia to adapt its organisation as well as its means of communication and funding to altered circumstances.”

The Promotion of Arts and Culture Act of 2012 brought about some fundamental reforms. The Board of Trustees was trimmed from 25 to 9 members. Strategic and operational authority were clearly separated for the first time, with the Board of Trustees responsible for strategy and the Secretariat for operations. The financial means available to Pro Helvetia have since been laid down by the Federal Council’s statement on the funding of cultural promotion by the Confederation (Kulturbotschaft) issued once every several years.

Spiritual National Defence
Politicians, intellectuals and journalists across party lines band together to demand a policy of “spiritual national defence” to help protect Switzerland from the Fascist threat posed by neighbouring countries.

A Parliamentary Motion
19 June: Fritz Hauser, a member of Parliament from Basel, proposes a motion urging the Federal Council take steps to protect Swiss identity following the rise to power of Hitler and Mussolini. A week later, the Swiss writers’ association makes the same demand.

A Federal Foundation for Culture
12 November: The Neue Helvetische Gesellschaft (New Helvetic Society) joins in the discussion and presents a plan for a “Helvetic Foundation.”
09 December: The Federal Council publishes a Dispatch on cultural policy “concerning the duty and the means of preserving and promoting Swiss culture.” It includes the idea of a federally-funded foundation for culture.

Pro Helvetia
5 April: The proposal for a cultural foundation is approved by federal decree, just a few months before the outbreak of the Second World War.
20 October: Originally planned as a private foundation, Pro Helvetia is transformed into a cooperative council regulated by public law.
Its first president is former Federal Councillor Heinrich Häberlin. Its director for the next nineteen years is Karl Naef; as secretary of the writers’ association, he had helped launch the debate about federal cultural policy. The council’s goal is to preserve “the spiritual independence of culture” in Switzerland in the face of the dangers represented by Nazi Germany and its Fascist propaganda.

In April, Pro Helvetia moves into its new quarters at Hirschengraben 22, in Zurich. From the very beginning, the cooperative council is subsidiary to the cantons and municipalities, and operates on the basis of applications received. In the early years, its budget (500,000 Swiss francs) is divided between two groups: one half is allocated to the “People” division, the other to the “Army” (also known as “Army and Home”) division.

New Duties
21 March: Pro Helvetia is assigned new duties, with an emphasis on promoting exchange and dialogue, as well as a focus on activities outside of Switzerland. The goal: breaking out of the spiritual and cultural “fortress mentality” of the war years.

An Autonomous Foundation
28 September: A federal decree transforms the cooperative council into an autonomous foundation regulated by public law. The “Army” division is dissolved.

Funding for Research
The Swiss National Science Foundation is established.

First Yearbook
Pro Helvetia publishes its first yearbook, summarizing its activities of the past several years. From then on, the publication appears yearly and serves as a source of information for members of parliament as well as the general public.

The Pro Helvetia Law
17 December: The federal government passes a law dedicated to Pro Helvetia; it establishes a legal basis for the Arts Council’s organization and activities. Pro Helvetia’s responsibilities include:

The Clottu Commission
The Federal Department of Home Affairs establishes a commission to be chaired by Gaston Clottu and charged with evaluating the state of cultural
affairs and activities in Switzerland.

Around the World
With the exhibition La Suisse présente la Suisse (“Switzerland presents Switzerland”) in Dakar, Senegal, Pro Helvetia supports a large-scale project on the African continent for the first time. After having focused its support on projects in the USA and Europe, in the following years Pro Helvetia broadens its scope to include projects around the world.

The Clottu Report
The Clottu Commission publishes its five-hundred-page final report on the state of cultural activities in Switzerland. It recommends adding an article on culture to the Swiss Constitution, and dividing cultural affairs among several administrative bodies, which leads to the establishment of the Federal Office of Culture in 1978. In addition, the report recommends intensifying cultural exchange within Switzerland and abroad. Suggestions include a focus on the periphery and the creation of a proactive foreign service for Pro Helvetia.

For the first time in the history of its activities abroad, Pro Helvetia organizes an event series lasting several months: entitled “Espace,” it takes place in the premises of the Swiss Tourist Office in Paris and includes exhibitions, theatre performances, film evenings and concerts. It is also the first time that Pro Helvetia mounts a large-scale project without the participation of diplomatic representatives. 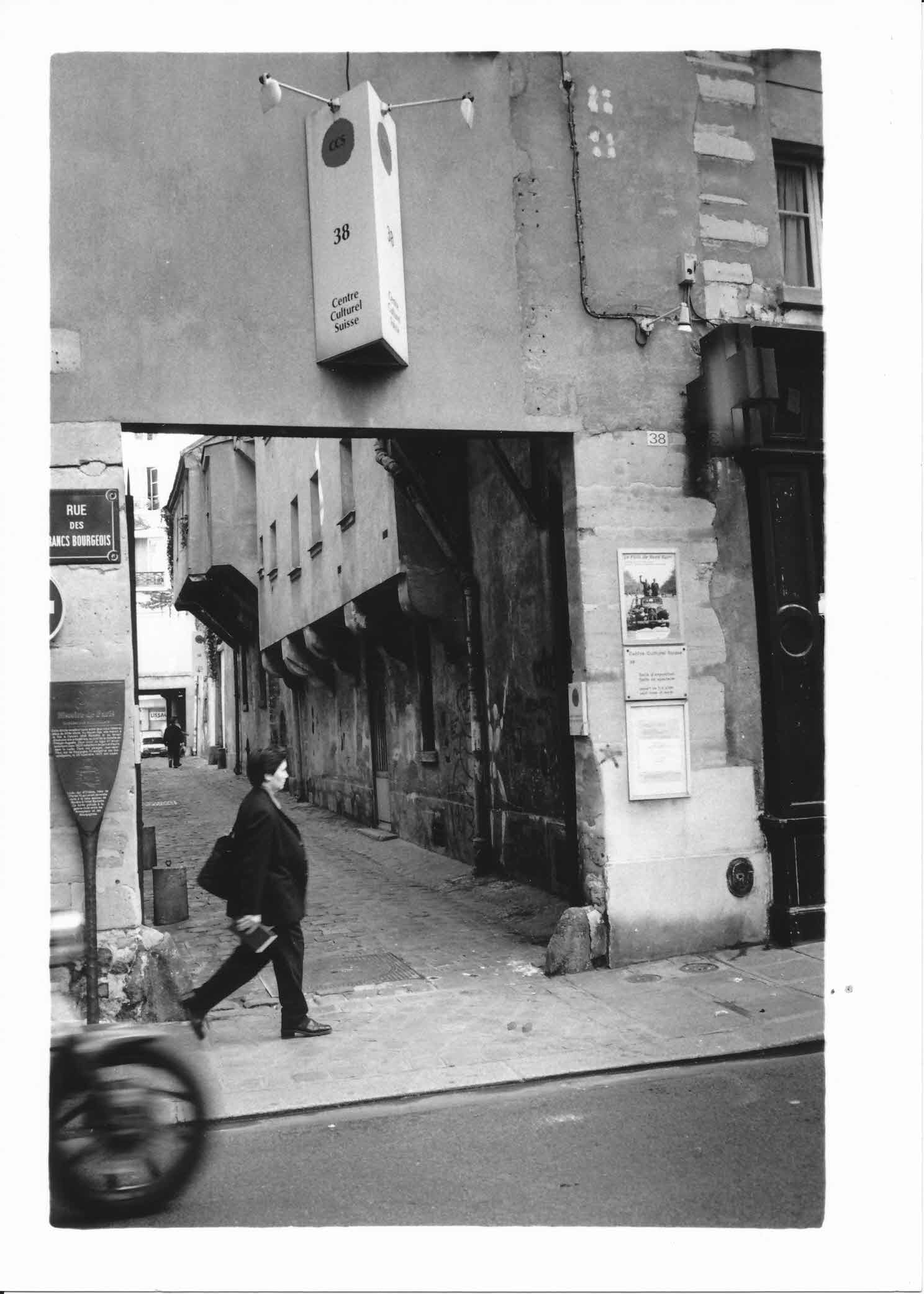 In Paris
The Centre Culturel Suisse opens in Paris. Its creation, and the attendant purchase of space in the venerable Hôtel Poussepin in the Marais district, were preceded by a long tug of war between the Pro Helvetia Board of Trustees and the Federal Council, or rather the Federal Department of Home Affairs. A petition and donation drive spearheaded by the francophone weekly “L’Hebdo” helps make the purchase a reality.

Passages
The same year sees the launch of “Passages,” Pro Helvetia’s cultural magazine. Conceived for international circulation at first, it appears in French and German and, as of the fourth issue, in an English edition as well. 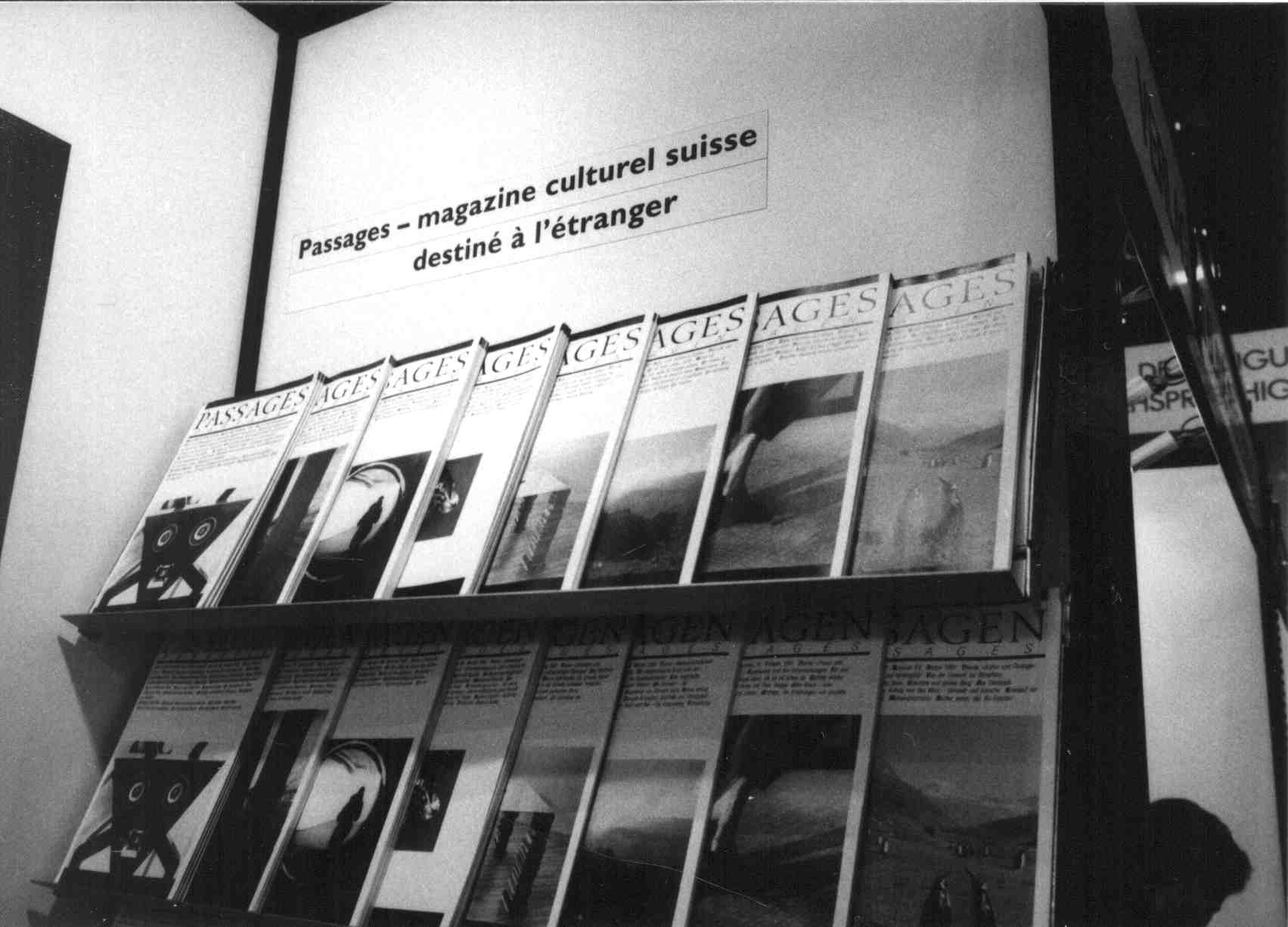 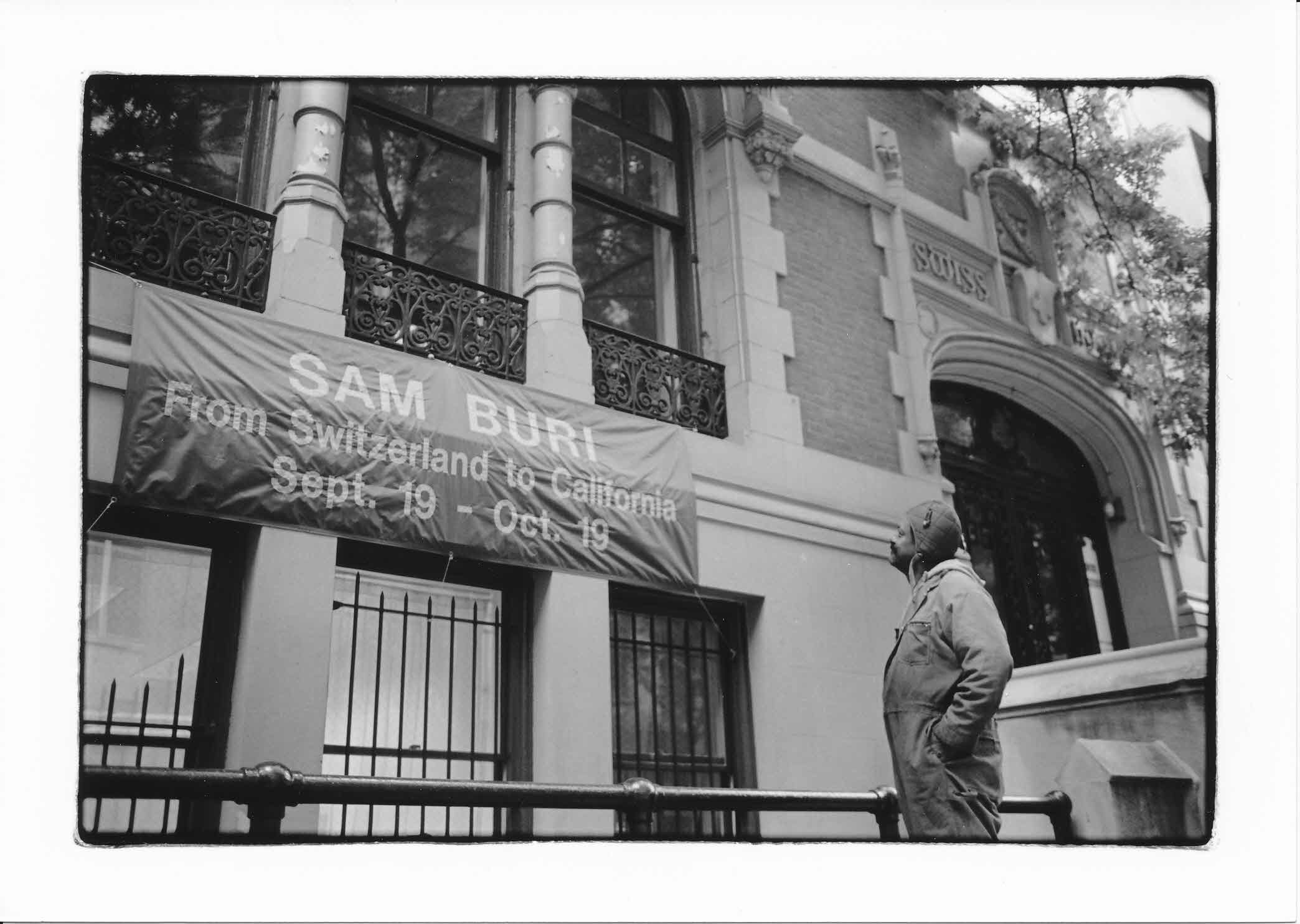 The Swiss Institute opens in New York.
In a national referendum, Swiss voters reject both the proposal for a “Cultural Initiative” (which would allocate one percent of the annual federal budget to cultural funding), and the Federal Council’s counter-proposal. 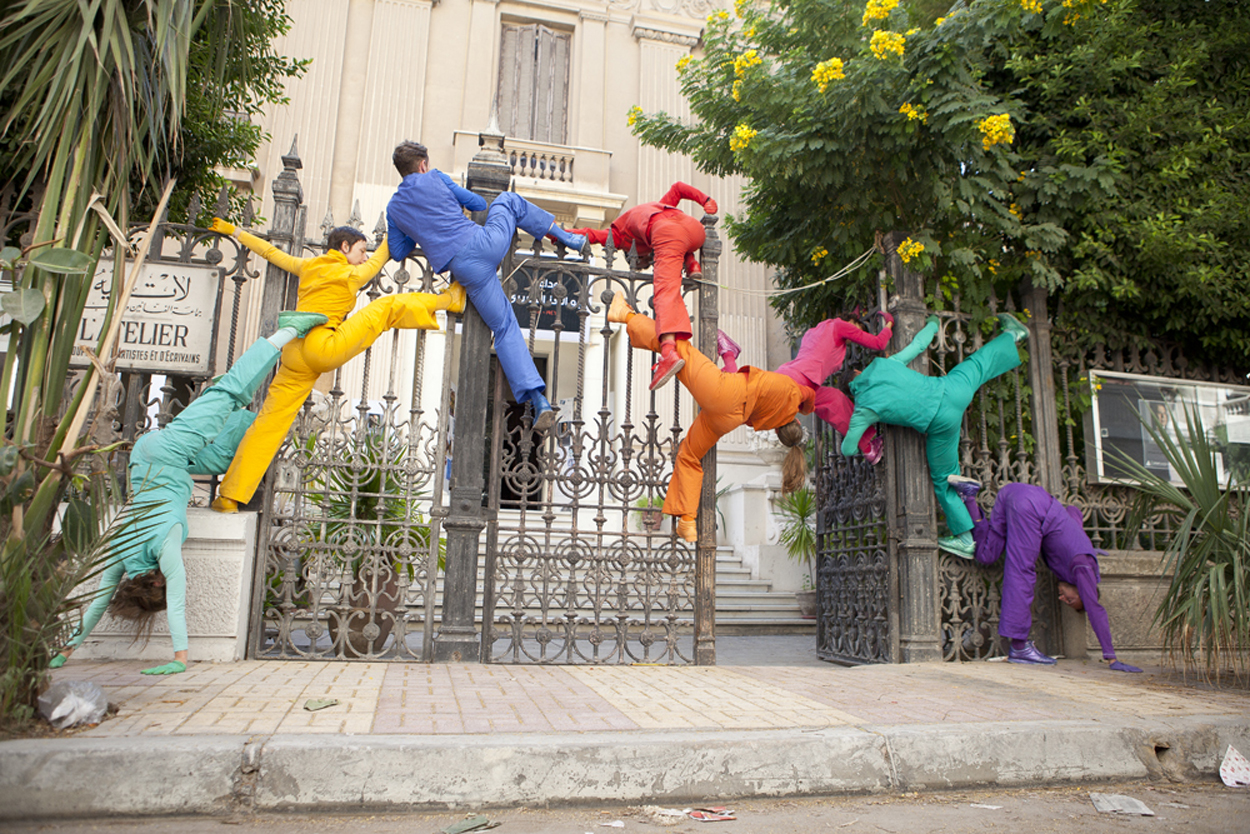 In Eastern Europe
After the fall of the Iron Curtain, Pro Helvetia takes over the bureaus opened by the Swiss Agency for Development and Cooperation in Poland, Czechoslovakia and Hungary, in order to use them as Antenna offices.

In Geneva
The Antenne Romande for French-speaking Switzerland opens in Geneva. 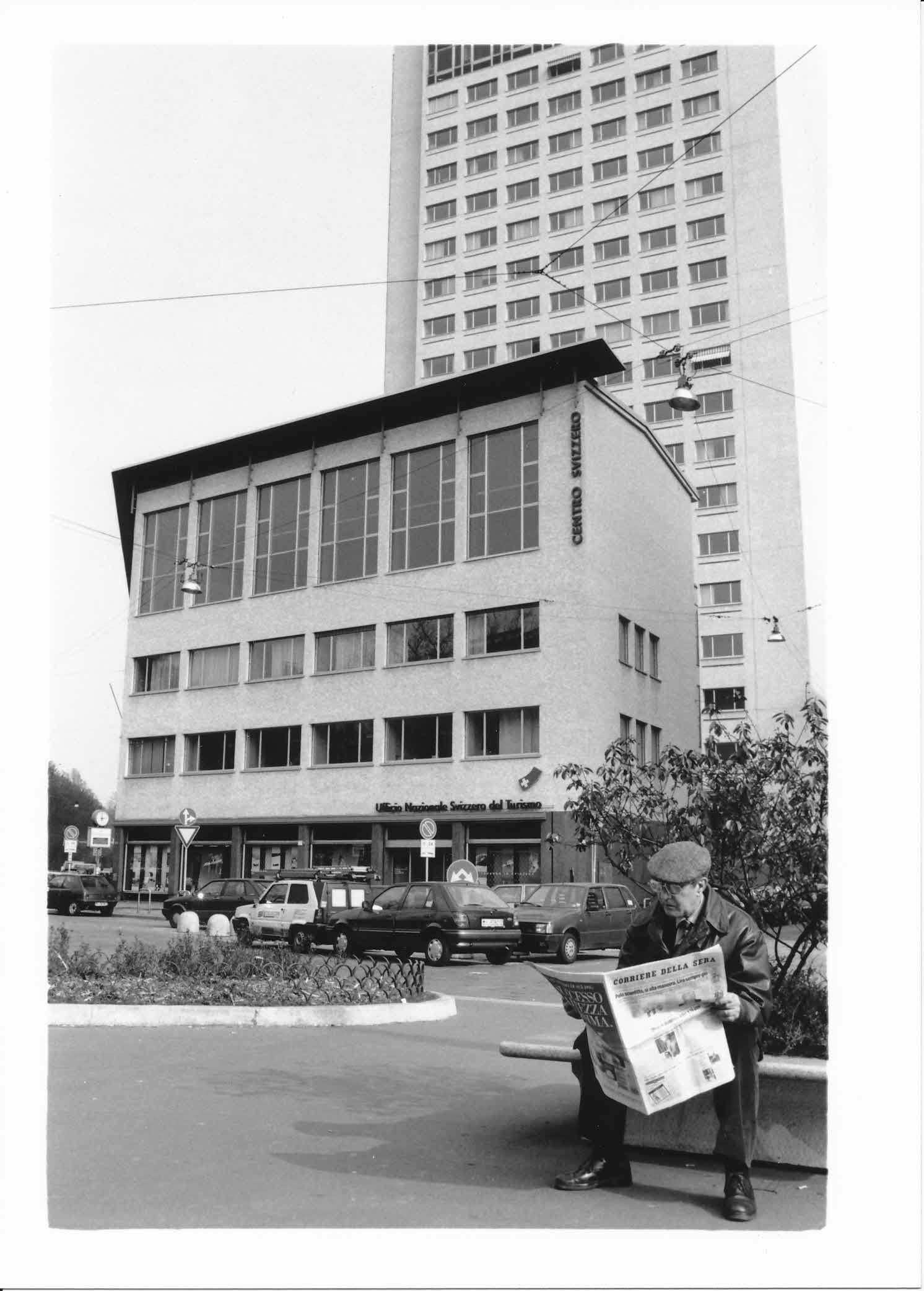 In Milan
The Centro Culturale Svizzero opens in Milan, Italy.

A Rise in Funding
1 January 2002: Pro Helvetia introduces some fundamental reforms. The most important change: the maximum amount that the secretariat may independently grant a funding application is raised from 5,000 to 20,000 Swiss francs.

The Hirschhorn Affair
The controversy surrounding Thomas Hirschhorn’s exhibition “Swiss-Swiss Democracy” at the Centre Culturel Suisse in Paris results in a one-time cut of one million Swiss francs to Pro Helvetia’s budget. However,the subsequent investigation by parliamentary administrative controls results in a positive evaluation of the Arts Council.
As part of its newly-defined international strategy, Pro Helvetia adopts the principle of cultural regions: Russia / Siberia; China; India and Southeast Asia; Oceania; Africa; the Middle East. Long-term plans are made to establish branch offices in each of these regions, with the exception of Oceania.

In Rome
The Istituto Svizzero in Rome receives the status of a Pro Helvetia partner institute.
After ten years of developing networks in Eastern Europe, the office in Cracow moves to Warsaw; the offices in Bratislava, Prague and Budapest are closed. The First Law on Culture
11 December: The federal Parliament adopts the first Swiss law on the promotion of culture. From now on, a Federal Dispatch regulating cultural policy and spending on culture is to be submitted to Parliament every four years. Pro Helvetia is also subject to this new law. Pro Helvetia also undergoes some fundamental reforms, including the allocation of additional responsibilities.
The online application portal “myprohelvetia” is launched this same year.

In Shanghai
A liaison office opens in Shanghai, China. 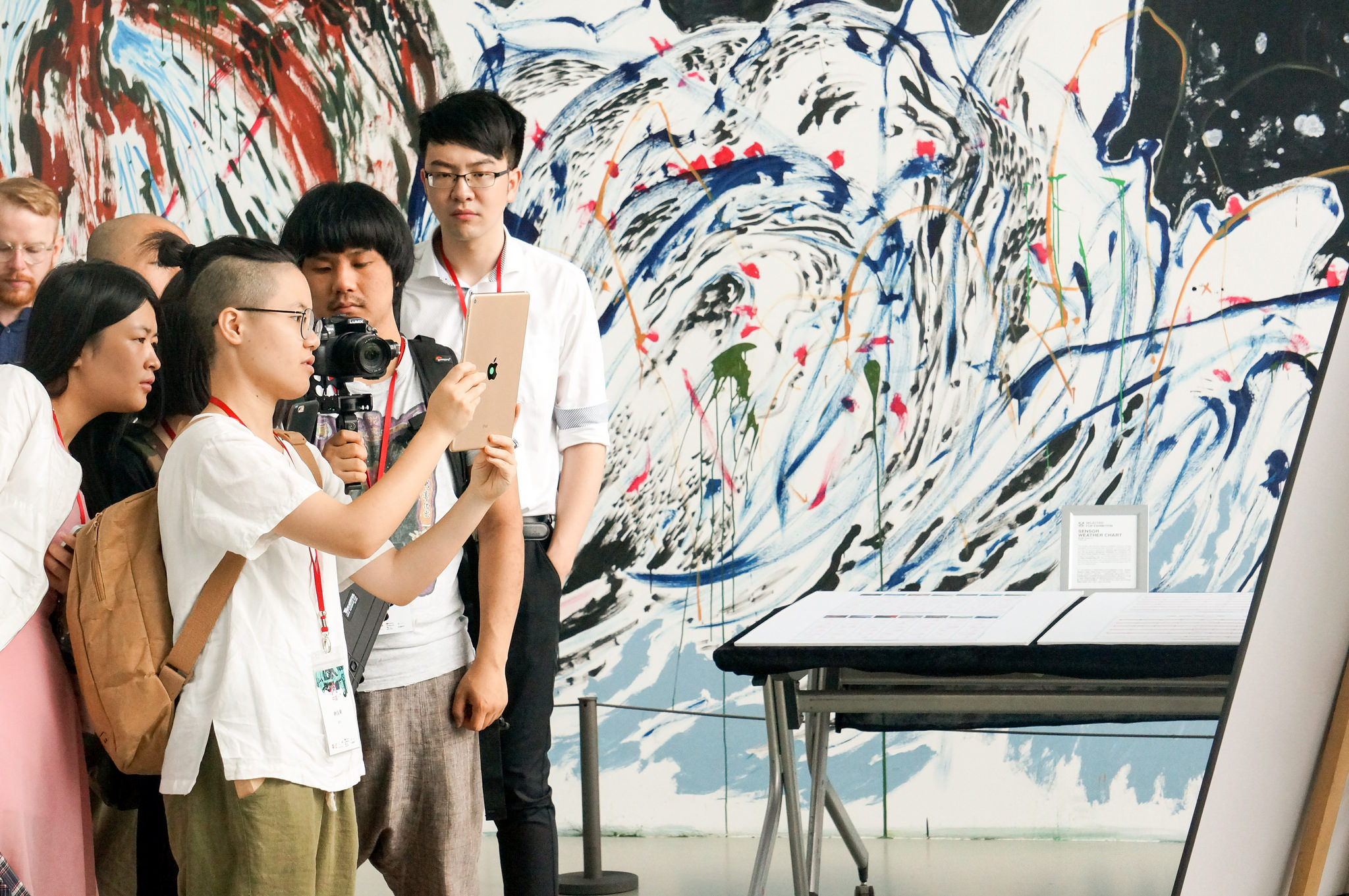 First Dispatch on Culture
1 January: The new federal law on the promotion of culture and the first Dispatch on culture come into effect. Among its new activities, Pro Helvetia assumes responsibility for the support of up-and-coming artists, art education, art biennials and the Swiss presence at international book fairs – areas previously under the auspices of the Federal Office of Culture. In return, film promotion and support for publishing are transferred to the FOC.
February: The liaison office in South Africa moves from Cape Town to Johannesburg.

Withdrawal from Warsaw
The office in Warsaw closes. From now on, joint cultural activities between this region and Switzerland are to be handled through the Zurich office, asis the case for all EU member states.

Second Dispatch on Culture
Parliament approves the second Dispatch on culture for the period 2016 – 2020. During the five years to come, Pro Helvetia plans to support Swiss art and artists, encourage cohesion within the country, and expand the presence of Swiss arts and culture on an international scale. In addition, an initiative entitled “Culture and Economy” aims to coordinate support for design and interactive digital media.

Launch of the culture and business initiative
An initiative by Pro Helvetia to develop models for promoting projects in the fields of design and interactive media. The focus is on the projects’ artistic quality and on their innovation and market potential.

New liaison office in Moscow
On 25 February Pro Helvetia opens its latest liaison office in the centre of Moscow. The step was preceded by «Swiss Made in Russia», a cultural exchange programme between Switzerland and Russia that has been running since 2012.

Start of COINCIDENCIA programme
COINCIDENCIA boosts cultural exchange between Switzerland and South America and explores possibilities of establishing a liaison office in the region.

Refurbishment and inauguration
After a complete refurbishment of the head office building commissioned by the City of Zurich, the Swiss Arts Council is moving back into its traditional premises at Haus zum Lindengarten.